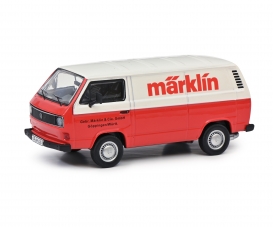 Volkswagen’s efforts to develop a successor to the extremely successful VW T2 Transporter series began in 1975, culminating in the launch of the VW T3 series in May 1979. Originally, the T3 specifications included a front engine with a front-wheel drive. However, due to the tight financial circumstances of the VW Group, the development of an all-new engine generation was abandoned and the T3 was equipped with an air-cooled rear engine like both of its predecessors.   Warning! Not suitable for children under 14 years. 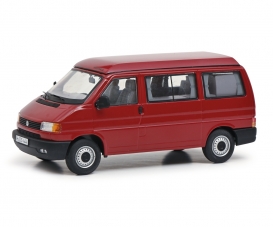 With the launch of the Volkswagen T4 Transporter series in August 1990, the era of rear-wheel drive and rearengined VW Transporters finally came to an end. While in the predecessor T1, T2 and T3 series the engine was housed in the rear of the vehicle, the completely redesigned VW T4 now featured a transverse front engine that drove the front wheels. In particular, this had the considerable advantage that the VW Transporter, like most of its competitors, now also had a lower-lying, continuous load area. This continuous load area was an extremely important sales argument and was quickly reflected in the sales success of the T4. In addition to the purely commercial version of the Transporter which was mainly used by business customers and public agencies, the Multivan and Camping versions were particularly popular with private individuals. Thanks to a very practical and well thought-out interior, these vehicles offered a considerable degree of comfort on long journeys, were ideal for recreational trips and, thanks to the redesigned chassis and compact exterior dimensions, provided car-like ride comfort. 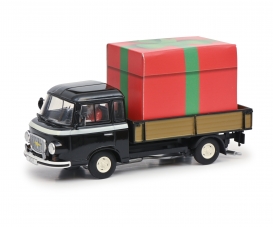 "This year, for the first time, the Barkas B1000 pick-up truck is being used as a Schuco Christmas model in 1:43 scale. But what is hiding under the really huge Christmas present on the loading platform? You will be surprised! Limited to 750 pieces worldwide, the Barkas, like its predecessor models in the 1:43 edition, will certainly sell out very quickly!" 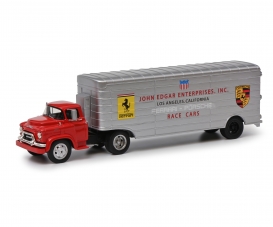 The John Edgar Racing Team was a well-known name and also one of the driving forces on the American race tracks of the 1950s. With sports cars of the brands MG, Ferrari, Maserati, Alfa Romeo and also some Porsches the team achieved numerous successes with famous drivers like Phil Hill, Caroll Shelby, Pete Lovely or also Joakim Bonnier. The aluminum-colored trailer with its typical GMC tractor will certainly be a welcome addition to any 1/43 scale race transporter collection.   Warning! Not suitable for children under 14 years.