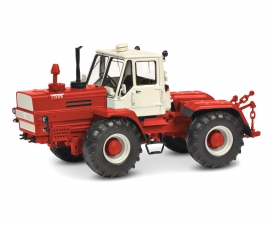 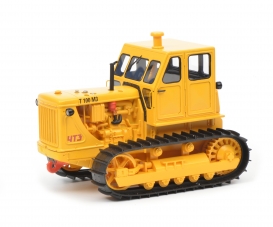 From 1963 to 1983, the „Chelyabinskiy Traktornyy Zavod“, the Chelyabinsk Tractor Plant, produced, believe it or not, over 410,000 T-100 track laying tractors. Rather more powerful than its S-100 predecessor model with 108 hp, the T-100 was used both in the agricultural collectives of the Eastern bloc and very often as a bulldozer. In the course of its 20-year production life, this track layer underwent a process of continuous development. Thus, from 1973, more and more technical components of its larger successor, the T-130, were incorporated to apply the part-sharing principle and thus make production more efficient and cost-effective. Schuco is going to produce in a limited edition of 500 pieces a miniature model of this T-100 to a scale of 1:32 in the PRO R line. This line, consisting of resin as the material, stands for exceptional and highly filigree small series models. By means of this highgrade model material, it is possible to produce very rare and exotic exemplary vehicles in perfect quality and also in low and exclusive production runs.   Attention ! Ne convient pas aux enfants de moins de 14 ans. 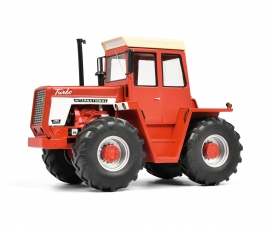 Headquartered in Chicago, Illinois, International Harvester (IH) was founded in 1902 following the merger of McCormick Harvesting Machine Company, Deering Harvester Company, Plano Harvester Co., Milwaukee Harveste Co. and Warder, Bushnell & Glessner Co. In 1908 a German subsidiary was founded in Neuss, which initially only sold US-imported products from International Harvester. In 1911 the Neuss-based company started to produce its first agricultural machines, followed by tractors in 1937. The International 4166 Turbo was a heavy four-wheel drive articulated tractor, which was produced between 1972 and 1976 in the US. Its 7145 ccm 6-cylinder turbo engine provided 178 hp, which made the 6300 kg tractor a powerful workhorse for its time.   Attention ! Ne convient pas aux enfants de moins de 14 ans. 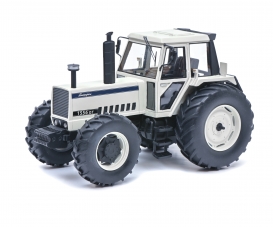 "The Italian firm Lamborghini Trattori was founded in 1948 by Ferruccio Lamborghini,the subsequent founder of Lamborghini Automobili in Pieve di Cento in northern Italy. Following his decision to concentrate on exclusive sports cars at the beginning of the 1970s, Lamborghini Trattori S.p.A. was acquired by SAME in 1973, which incorporated a number of new technologies into its product range. This included tracked vehicles and a fully synchronised transmission for tractors pioneered by Lamborghini Trattori. The acquisition culminated in the launch of the Lamborghini 1056 – 1556 series of tractors in 1981, which featured technology based on the Hercules 160. The five tractor models in this series were powered by six-cylinder engines. The Lamborghini 1556 was the top-of-the-range model and featured a turbocharger. The five Lamborghini tractors had a horsepower of 105 hp to 155 hp. The transmission was equipped with 12 forwards and 3 reverse gears."   Attention ! Ne convient pas aux enfants de moins de 14 ans. 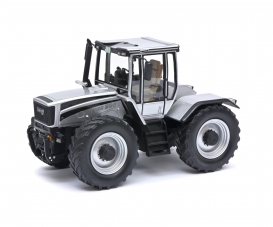 Founded in 1965 in the town of Velbert, Doppstadt is a German machinery manufacturer. In order to expand into new sectors, in 1999 the group established a new company called Doppstadt GmbH Schönebeck on the premises of the Schönebeck tractor factory. From 1999 to 2006, Schönebeck manufactured tractors with 75–205 hp engines. Unfortunately, sales did not meet the company’s targets and production was discontinued in 2006. This 1:32 resin model is a replica of the the Doppstadt Trac 200, which featured a Daimler Chrysler 6-cylinder turbo engine with a 6.4 litre capacity. The model number “Trac 200” indicated its 200 hp engine.   Attention ! Ne convient pas aux enfants de moins de 14 ans. 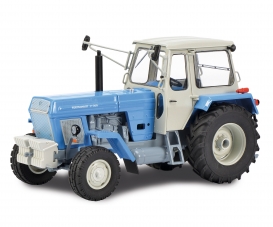 The ZT 300 was undoubtedly one of East Germany’s most well-known and popular tractors. Designed as a towing tractor, the ZT 300 series was produced from 1967 to 1984 by the publicy owned enterprise Traktorenwerk Schönebeck. This series replaced the hugely successful Famulus series. By 1984, a total of 72,382 vehicles in the Fortschritt series had been produced – a staggering number for a tractor model. The ZT 303, which was produced from 1972, featured an additional front-wheel drive. Thanks to its versatility, it quickly became the bestselling model in the 300 series. In 1984, the ZT 300 series was replaced by the ZT 320 series.   Attention ! Ne convient pas aux enfants de moins de 14 ans.