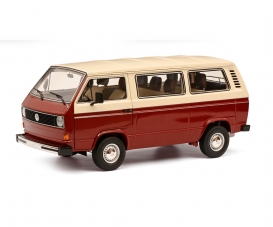 The Volkswagen T3 Transporter, which was unveiled in 1979, set new standards for recreational and family activities. In contrast to the first two generations of the VW Transporter, the very squarish and matterof-fact shape of the T3 was far from charming for many customers. Nonetheless, its powerful boxer engine, greater comfort and the large amount of available space ensured the Volkswagen T3 soon became a firm favourite with customers. Manufactured between 1979 and 1992 as a bus, box van and flat-bed truck, it offered lots of opportunities to stamp your personal mark on the vehicle. Due to the great success of the VW T2 Westfalia camper van, the T3 was also designed as a Westfalia. During its production period, there were a number of camping variants such as the ‘Joker’ basic model and the slightly more elaborately equipped ‘Club Joker’. In later years, the ‘Joker’ model was also marketed under the name ‘California’. Volkswagen subsequently launched the ‘Atlantic’, which was a more luxurious mobile home. Today, the original T3 ‘Joker’, ‘Club Joker’, ‘California’ and ‘Atlantic’ versions are an integral part of the VW club scene and fetch high prices among collectors and fans.   Attention ! Ne convient pas aux enfants de moins de 14 ans.